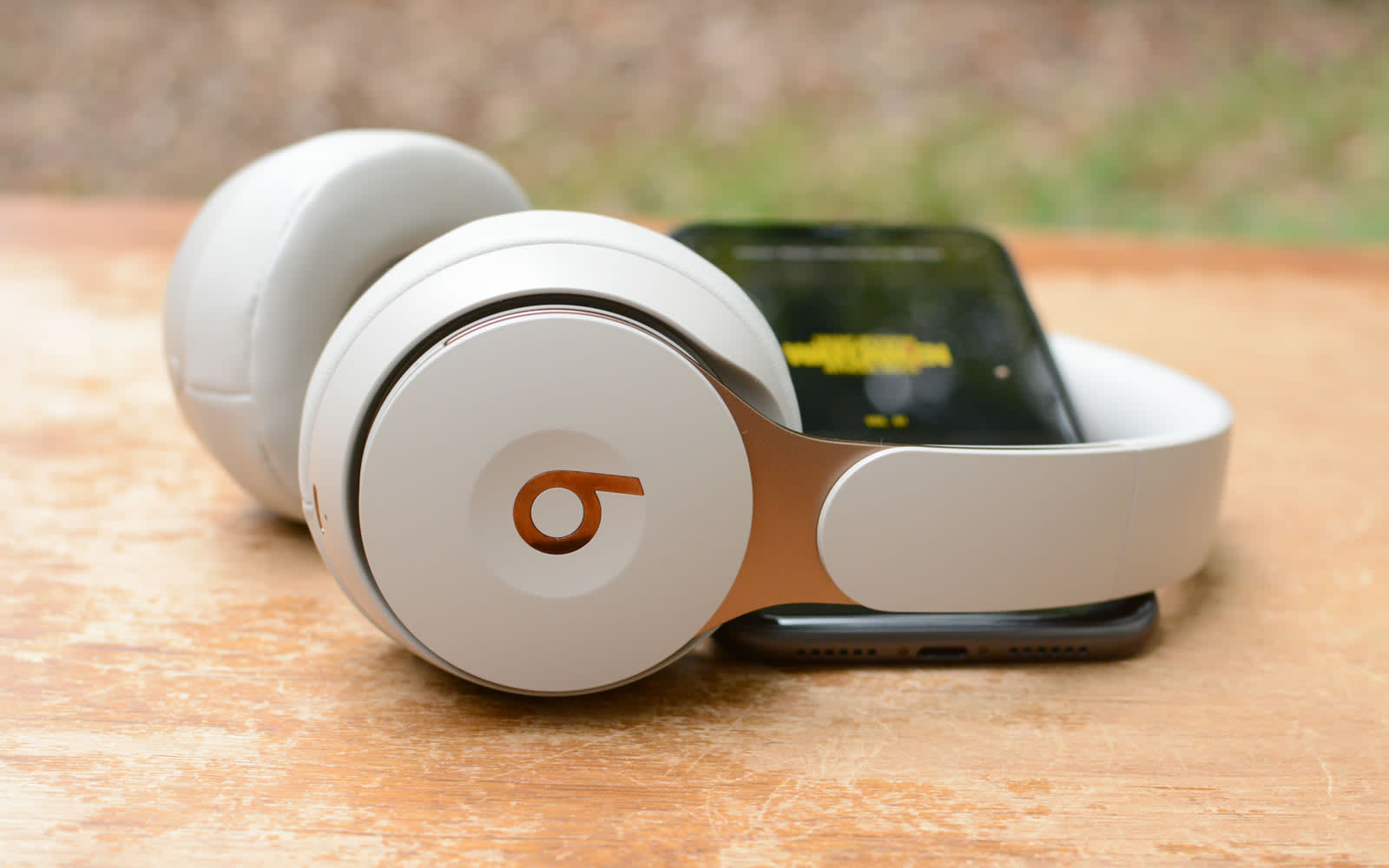 The Solo line has had some minor aesthetic changes along the way, but the Pro is a nearly total redesign of Beats’ on-ear model. The most obvious tweak is the headband. The adjustment mechanism is now a slider instead of an exposed metal band. It looks a lot better and helps the Solo Pro keep its premium appearance, instead of exposing cheap-looking parts. Beats has been criticized for its construction in the past, and this one change does a lot to address that.

Like the Sennheiser Momentum Wireless, you turn these on by unfolding them, and you turn them off by folding them back up. There’s no power button here, so don’t waste your time hunting for it.

Another big change is the earpads. They’re much thicker than previous Solo models, which helps enhance comfort. The padding on the headband has more cushion as well, and it pinches your head less. That being said, these are still uncomfortable. Sure, you need a good seal for active noise cancellation to be effective, and that requires a certain degree of pressure. The trade-off is comfort though, and after about 30 minutes of wearing the Solo Pro, I’m ready for a break.

It can be tough to overlook a lack of comfort, but there’s a ton to like here. The Solo Pro has Apple’s H1 chip inside, so features like fast pairing and hands-free Siri are included. As someone who uses wireless headphones or earbuds everyday, it’s so nice to not have to suffer with a Bluetooth menu. And being able to summon Siri with my voice instead of having to reach for a button is a small, but welcome, respite.

On-board controls for volume adjustments are on the outside of the right earcup. Press the top to increase the level or the bottom to turn the audio down. A multifunction button in the center, on top of the iconic “b” logo, handles play/pause (single press), skipping forward (double press) or going backward (triple press). If you prefer another virtual assistant, you can press and hold this button summon it. All of these controls are physical button pushes as opposed to touch controls, and they’re very reliable. The other control is a single button on the bottom edge of the left earcup, and it flips between ANC and transparency mode. It also puts the headphones in pairing mode if you hold it down.

The Solo Pro and the Studio3 Wireless

If you like to use your wireless headphones with a cable when the battery runs out, I’ve got some bad news: the Solo Pro doesn’t have a 3.5mm jack. You can still use them wired, but you’ll have to buy a Lightning-to-whatever cable to do it. Apple’s quest to kill the headphone jack continues, and it brought Beats along for the ride.

Where the Solo Pro really shines is overall audio quality and noise cancellation. Like on other recent Beats products, including the Studio3 Wireless and Powerbeats Pro, the tuning is much better here. There’s still plenty of bass, but it’s not a constant burden that overpowers everything else. The Solo Pro packs some pleasant thump, especially in genres with more low-end tone — hip-hop, electronic, and booming metal. The highs are bright and the mids are well represented, so the soundscape here is full. Guitars, drums, vocals and other elements come through clearly. There’s also some depth to the sound, which keeps particularly dense tracks from becoming a chaotic mess.

A good example of this is Oh, Sleeper’s Bloodied/Unbowed. Their metalcore style includes plenty of booming drums and intricate guitar riffs that back a mix of melodic and screaming vocals. There’s a range of dynamics as well, so the elements on display are pretty diverse. The Solo Pro keeps things neat, allowing everything to stand on its own — whether that’s during a softer sung part or a bombastic breakdown. The clarity is also on display for genres like folk, bluegrass or country where you get more detail in the instrumentation. Acoustic guitars ring out nicely on albums like The Highwomen’s self-titled debut and the vocals to envelope you, rather than just sit there.

The ANC does a nice job of blocking out your surroundings so you can focus on the music or podcast you’re listening to. Again, these are on-ear headphones, so we’re not talking Bose or Sony levels of noise cancellation, but the Solo Pro does a very good job countering ambient distractions. Plus, the transparency mode offers a window into your environment when you need to have a quick convo or listen for your stop on the train. The Solo Pro also uses Beats’ Pure ANC, so the audio is being constantly adjusted automatically to suit your surroundings.

Beats says you can expect up to 22 hours of battery life with ANC on and up to 40 hours with it turned off. During my tests, I was able to use the Solo Pro for almost a full work week before I needed to reach for the charging cable. That was with about three to four hours of daily use listening to music and podcasts and dialing to conference calls. Since you turn these off by folding them up, I didn’t always power them down when I took a break, but I still managed nearly five days of use. When it’s time to plug in, a quick-charge or Fast Fuel feature will give you three hours of playback in 10 minutes. Lastly, these don’t automatically pause when you take them off, so that’s something to be aware of that could also impact battery life.

At $299.95, the Solo Pro is pricey but in line with some other flagship over-ear models. The Solo3 Wireless is just $50 more and packs many of the same features. It doesn’t have hands-free Siri, though. Our current favorite option, the Sony WH-1000XM3, has slightly better sound and the adaptive ANC works very well. But they’re also $350. The Bose 700 is another very nice set of noise-cancelling headphones, but they’re even more expensive at $399. To me, the extra comfort that all three of those offer is worth the extra money.

The Solo Pro are Beats’ most impressive headphones to date. They have a lot of attractive features, from constantly adapting Pure ANC to always-on Siri, that make them a solid all-around set with great audio quality. But for me, a person with a large melon of a head, they can become quite uncomfortable in less than an hour. And since I use headphones daily for extended listening sessions, that’s something I can’t overlook. If you prefer on-ear headphones though, the Solo Pro is one of the best options available.