Jabra Elite 75t review: The leap from good to great

Jabra Elite 75t review: The leap from good to great 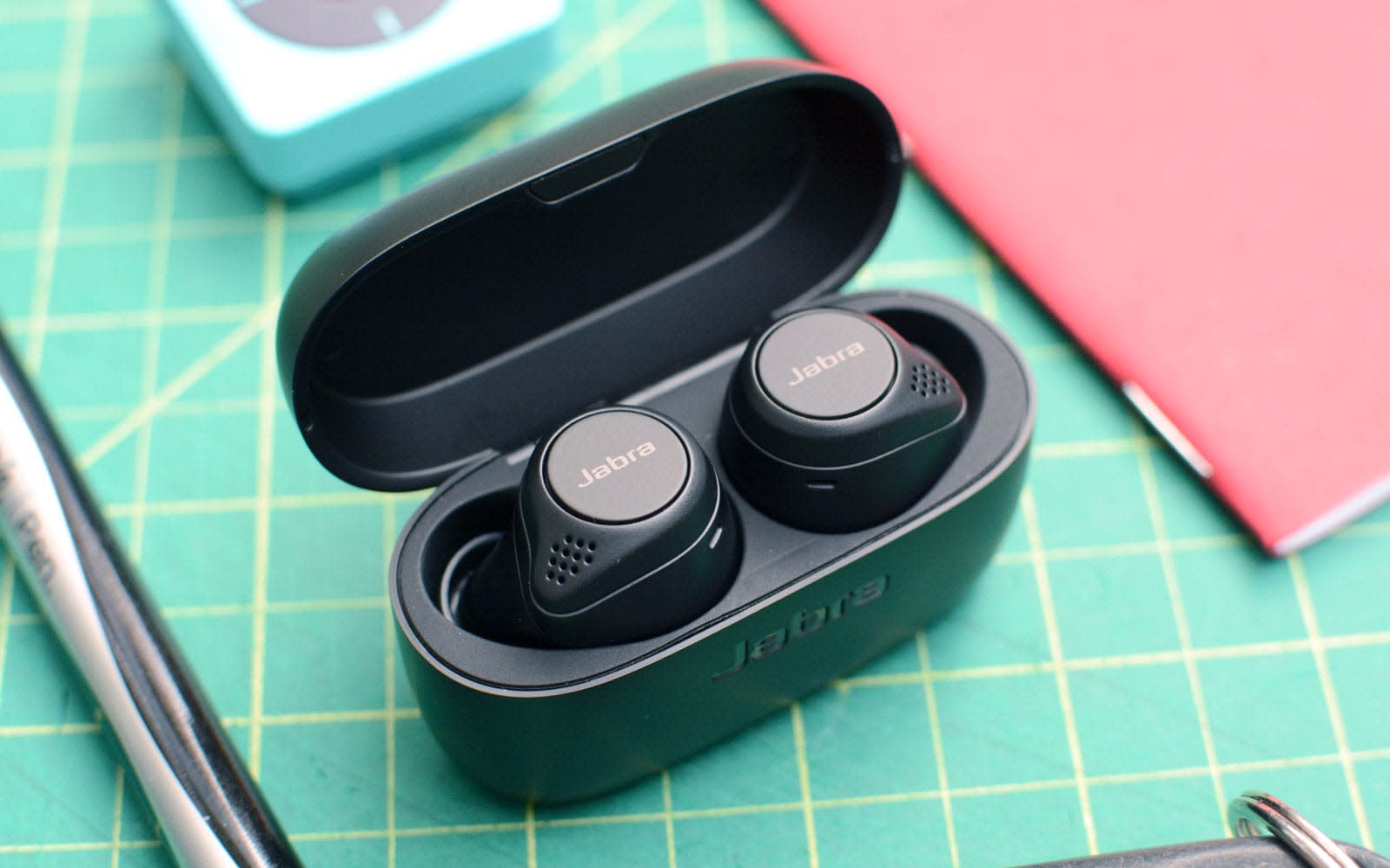 The most obvious difference between the Elite 75t and the Elite 65t is size. Even the new charging case is significantly smaller than the old model’s. The top and bottom are also flat, so the case stands on its own when you open it. As someone who tests a lot of earbuds with cases that flop over, it’s a nice touch. The LED-charging indicator is on the back though, to the left of the USB-C port. This means when you close the case, you have to spin it around for a battery status update. It’s great that it’s there, but it would be much better if it was around front, where the case opens.

The earbuds themselves are also drastically smaller. Jabra says they’re 20 percent smaller overall, but when you do a side-by-side comparison, it seems like there’s an even bigger change. The armlike extensions that pointed down toward your face on the Elite 65t are gone. Instead, Jabra opted for a tiny triangular elbow to house the microphones. The main earbud housing is also a lot smaller but remains nearly as deep. Basically, despite a reduced diameter, the buds themselves still stick out of your ears a similar amount. Not having that mic extending down makes a big difference though. You can feel it clearly when you’re wearing them. In short: The 75t buds are much comfier.

The Elite 75t is IP55 rated, so you can be confident when you wear these to the gym. Jabra has also thrown in a two-year warranty against dust and water damage (low-pressure, sustained spray), so if something does go wrong that’s within the confines of “regular” use, you should be covered.

There are still onboard controls, even with smaller earbuds, but now there’s only one button on each side. On the left, you press and hold to turn the volume down and single press to turn HearThrough transparency mode on or off. A double press skips forward while pressing three times goes back. When you’re on a call, a single press on the left button will mute or unmute the mics. And a double press on the left side will activate “sidetone,” or the ability to hear yourself better during calls.

On the right side, the button answers or ends a call with a single press, and pressing twice will reject an incoming call. When music or other audio is playing, pressing once will pause or resume. A double press will activate your voice assistant of choice (Alexa, Google Assistant or Siri), and to counter the left side, a press and hold will turn the volume up. It sounds like a lot, and it does take some getting used to — especially having volume controls on opposite sides. But these are physical buttons, not touch controls, so they’re more reliable than some of the other true wireless earbuds I’ve tested. You have to remember where they are and how to activate them, as they aren’t as straightforward as the controls on other sets, but they work well.

The audio quality on the Elite 65t was… fine. It got the job done, but it lacked depth and could use a bit more bass. Jabra mostly fixed that on the Elite 75t; there’s now ample thump to songs from artists like J Dilla, Com Truise and PVRIS. The company offers a customizable EQ inside the Sound+ app, so you can tweak the sound to your liking. There’s both an EQ curve and a smattering of presets to help to find a tone you like. To me, the Elite 75t sounds decent out of the box, but I increased the bass and mids slightly to better suit bass-heavy genres like metal, hip-hop and synth-heavy electronic tunes. The default sound profile has too much treble for my liking, especially at high volumes, but I was able to quickly remedy that.

Bass on the Elite 75t has more punch. And overall, the audio sounds less compressed than on that previous set. Bring Me The Horizon’s “Ludens,” for example, has a much bigger, open and bombastic sound on the 75t. There’s noticeably more depth and detail to the drums, guitars and drum machine. On the 65t, the song lacks the aggressive, loud energy it’s meant to exude. The bass is boomy on the 75t, but it’s supposed to be, and you get more nuance to distorted guitars and drum tracks with the new model.

Jabra promises up to 7.5 hours on a charge just with the Elite 75t earbuds themselves. On paper, that’s 2.5 hours more than the Elite 65t. The total listening time of 28 hours — when you add in the charging case — is almost double that of the previous model’s. While listening to music and using the HearThrough transparency mode some of the time, I managed nearly 6.5 hours on a charge. That’s not quite what Jabra promised, but it’s still an hour and a half more than last year’s model — and less than what I’d consider “regular” daily use, since I only had to charge the entire set once during a workweek. Specifically, that’s using the Elite 75t for an hour or two and docking them in the case when they aren’t in use multiple times per day. Plus, a quick-charge feature will give you an hour of listening time in 15 minutes, so battery life won’t be a constant concern.

At $180, the Elite 75t are $10 more than the Elite 65t. Initially, Jabra announced the price of the new model would be $199, but thankfully, it changed it when they went on sale. At that price, the Elite 75t would be much tougher to recommend. There are plenty of improvements, but those upgrades already come at a cost. The Elite 75t is slightly cheaper than the $199 AirPods that debuted in the spring, but those offer hands-free Siri and quick pairing, plus a wireless-charging case — features I could argue are worth the extra $19. Jabra says it will have a similar charging option soon, but you’ll probably have to pay more to add one to your existing set. Or if you wait, there will likely be an option to get the wireless-charging case from the jump. I can’t see it being tossed in for free.

Another solid option for less than $200 is Audio-Technica’s ATH-CKS5TW. At $169, they offer a nice natural sound profile and a whopping 15 hours of battery life on a charge. The trade-off is that the buds themselves are huge compared to a lot of the competition’s. If money is no object, you can get the best true wireless earbuds available right now for just $50 more: Sony’s WF-1000XM3. They’re a bit larger as well, but they pack in powerful ANC, great sound and comparable battery life to the 75t. They’re also likely to go on sale next week during the Black Friday blitz.

With the Elite 65t, Jabra established itself as a key player in true wireless earbuds. The company built an audio accessory that competed with the likes of products from Apple, Samsung, Sony and Sennheiser. Perhaps most important, it didn’t cost nearly as much as the flagship models from some of those companies. The 75t is another great true wireless option, with improvements to size, battery life and sound quality. They don’t have active noise cancellation, and a wireless-charging case is still in the works. But even with a couple of caveats, Jabra will likely be one of the best true wireless options for less than $200 for months to come.