Max Q: Huge week ahead for SpaceX and Virgin Orbit25 May 2020

In addition to Traeger’s handy app that allows you to control and monitor the grill remotely, the Ironwood series grills ship with a pellet sensor. This add-on keeps tabs on your fuel supply, so you don’t have to worry about running out. The app also houses a wealth of recipes, which you can send directly to the grill from your phone. The Ironwood has a barrel-shaped design, which circulates smoke and heat before it exits the exhaust port on the back, and a small side shelf to rest supplies on as needed. And because the grill has an internet connection, you’ll be privy to regular firmware updates that improve grill performance. 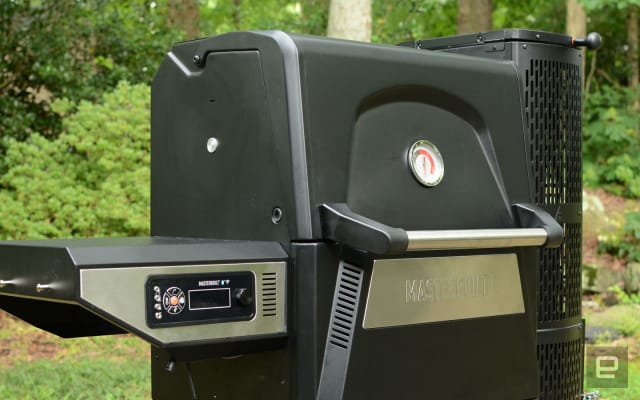 For the most part, built-in WiFi connectivity is for pellet grills. More often than not, if you want the same feature on a charcoal grill, you’ll have to settle for a separate purchase. Masterbuilt’s Gravity Series 560 is one exception. It’s a gravity-fed charcoal grill you can monitor from your phone.

Another key thing here is price. The 560 is $499: hundreds of dollars less than a lot of WiFi-enabled pellet grills, and less than half of what you’d pay for an Ironwood. The build quality isn’t quite up to Traeger’s standards, but the performance is great. In seven minutes, the 560 can be at smoking temperature (225 degrees), and the grill can hit a blazing hot 700-degree searing temp in less than 15. Plus, the fuel source is easier to find. Almost every grocery store carries charcoal while, despite the popularity of pellet grills, you still have to visit a hardware, sporting goods store or go online to buy pellets.

You will have to make some sacrifices here, though. For starters, the app isn’t as full-featured as those that come with some connected pellet grills. You can basically only monitor things, not make any adjustments. Second, some components of the grill are rather flimsy, especially the sides of the charcoal hopper. Even with those caveats, getting a grill that can reliably do low-and-slow BBQ and high-heat searing — and that also uses a common fuel source — is an interesting proposition at this price. 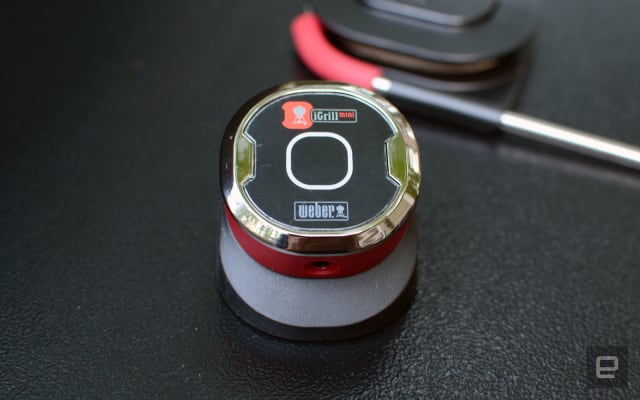 I’ve been using the Weber iGrill Mini for years now. Until I added it to my grilling arsenal, I had a bad habit of overcooking steaks. And in my defense, it’s really easy to do if you don’t have some type of thermometer. With the iGrill, you can insert a food probe before you start cooking, select your meat or seafood, pick your desired doneness and an app will alert you when the food is ready. It will also warn you when you’re getting close. And if you like a manual route, you can skip the food preset entirely and just go by internal temperature. The iGrill also lets you use a probe to monitor ambient grill temps, should you need to do so.

Weber offers a range of options here, starting with the single-probe iGrill mini (under $50). The iGrill 2 can support up to four probes at once, as does the iGrill 3, which is specifically for use with some of Weber’s gas grills. Those are both $100. 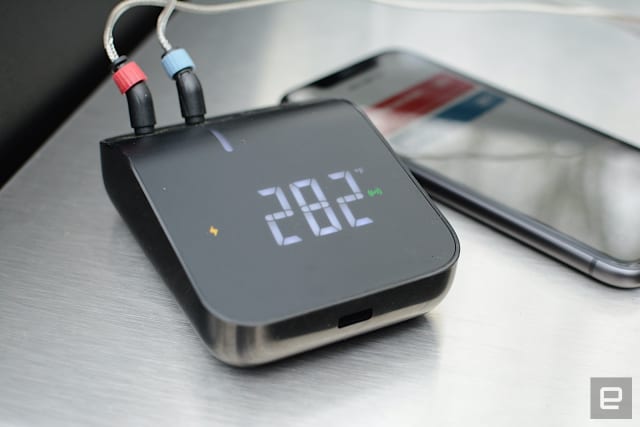 Weber won Engadget’s Best of CES 2020 award for Best Connected Home product with the Weber Connect Smart Grilling Hub, and for good reason: The standalone cooking device offers all of the smart features of WiFi connectivity on literally any grill. The Weber Connect app has step-by-step guidance for a range of meats and seafood, so you have a sous chef on your phone at all times. What’s more, the Hub features June’s software that uses algorithms to estimate completion times and tells how long until the next phase of cooking.

The Weber Connect app is somewhat limited in terms of presets right now, but you can opt for a manual mode to bypass the software guidance. The company has committed to adding more profiles, so you should see new items pop up in the app over time. The Hub ships with two probes — one food and one ambient temp — but it can support up to four simultaneously. 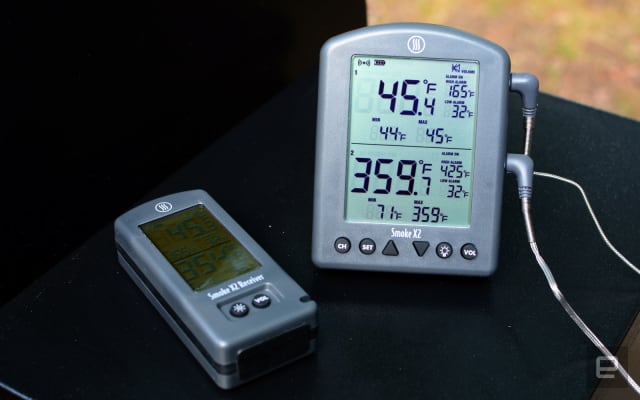 If you already have a grill or smoker you like, and you don’t need the fancy app-based guidance of Weber Connect, Thermoworks’ newly redesigned Smoke X thermometers are worth a look. These devices give you the ability to watch food and grill temperatures without having to venture outside. They use RF wireless technology to relay info from the hub at your grill to a handheld receiver. You can set high and low temperature alarms yourself, so this is a completely customizable device for more experienced users.

Thermoworks says the Smoke X has a line of sight range of up to 6,562 feet (1.24 mile). I’m not sure you’d want to trek that far away while cooking, but the increased signal strength means you won’t have to worry about walls and other obstacles around your house. The Smoke X also has a long battery life. Because it doesn’t rely on WiFi, it can last up to 330 hours on two AA batteries (1,800 hours for the receiver, Smoke X2). The device duo is also protected against outdoor hazards with an IP66 splash-proof rating. Lastly, the Smoke X2 and Smoke X4 ship with all the probes you’ll need, so you don’t have to make any additional purchases there. 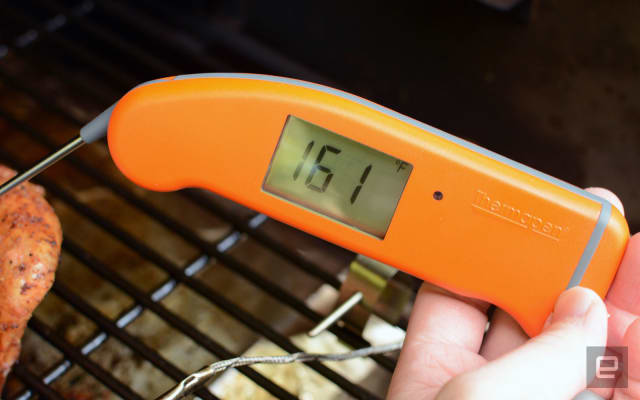 I get it: not everyone needs or wants to keep tabs on what’s cooking from afar. No shade there, but you do need a reliable thermometer to confirm when your food is done. I’ve been using the Thermoworks Thermapen Mk4 for a while now and it’s the best instant-read option I’ve found. There are cheaper models available elsewhere, but the Mk4 has a backlit display that rotates based on how you’re holding it. It also has motion sensing activation, so it automatically turns on when you pick up and shuts off after you put it down. The Mk4 is waterproof with an IP67 rating, so you don’t have to worry about getting it wet when you’re saucing chicken. 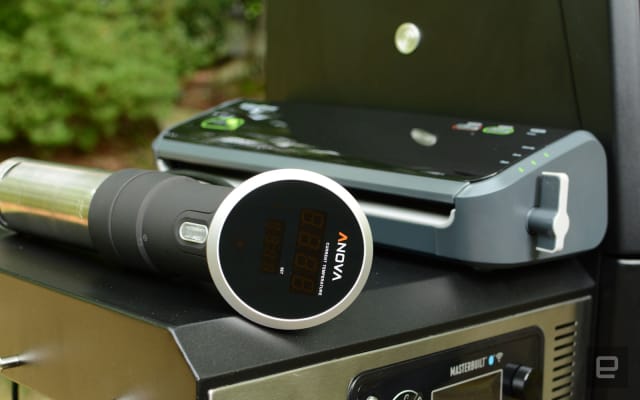 A sous vide device might seem out of place in a grilling guide, but hear me out. Since I started using an Anova Precision Cooker as part of my steak process, I’ve massively upped my game. Steaks are tender and juicy, with edge-to-edge doneness that’s difficult to achieve on a hot-and-fast grill. Basically, I sous vide for a couple hours (or more) and then sear the steaks on a grill to finish them off. Perhaps the best part is you don’t have to invest a ton to get one of these app-connected machines (they start at $99 from Anova), and they’re great for cooking other things, too.

In order to make the most of your sous vide setup, you’ll want to also invest in a vacuum sealer. I have the FoodSaver FM2000, a model that doesn’t have some of the flashy features of more expensive units, but it does the basics just fine. Plus, you can use this to seal leftovers for the freezer or store other goods you don’t want air to get to. I’ve also found vacuum-sealed packs handy for reheating things like pulled pork. With sous vide, the meat doesn’t dry out like it would in the microwave. What’s more, the pouches are great for marinating, which is essential for cuts that aren’t very tender, or just imparting flavors over time. Sure, you could just use Ziploc bags, but I’ve done that, and the FoodSaver is worth the investment.