At the time it aired, Deep Space Nine got a lot of flack for not being like its predecessors; it was too dark in tone, everyone argued too much, it was boring because they didn’t travel around in a ship, it was a ripoff of Babylon 5. All of these complaints seem rather quaint now, given the themes in both Discovery and Picard (and no one except maybe Dan Cooper really talks about Babylon 5 anymore). But one thing about the show that people continue to bring up — as a positive this time — is how it pioneered serialized storytelling on TV.

DS9 certainly wasn’t the first or only show at the time that ran plots over multiple episodes and seasons, but it was still rare in both syndicated and genre programming, and a first for Star Trek. At the time, I remember being delighted at how the show was rewarding my dedicated viewing. Now that’s par for the course with all kinds of television, from network to streaming. The fact that so many shows now follow a serialized model is why it’s almost impossible to start watching a series in the middle, with people putting aside time to binge entire shows from the very beginning.

With DS9 jumping on the serialized boat earlier than most of its contemporaries, you would think it would lend itself well to modern binge viewing, but over the few weeks I went through the seven seasons, I found this to be the opposite. The characterization and plot hooks were still as solid as I remember, but some of the storylines and pacing felt… thin. I remember Sisko and Kassidy Yates having this long, epic romance, but watching that season so quickly made me realize the relationship didn’t get a lot of screen time. The same goes for Rom and Leeta, who move from first date to marriage in a fairly short number of episodes. What I realized is that, while serialized, DS9 still depended on a weekly schedule for its pacing. Sisko and Kassidy’s relationship, or Leeta and Rom’s, felt long because they were each a handful of episodes stretched over months.

It really makes me think of the concept of “water cooler talk,” where people might discuss last night’s episode the next day at work. In high school, I looked forward to Tuesday mornings so I could talk about the new episode of Buffy the Vampire Slayer with my friends. You would discuss what happened and speculate about where the story was going next week. That gap between episodes left room for the story to grow, similar to how movement in comic books happens in the gutters between panels. Our minds would fill in the blanks.

Nowadays, there’s no room for that kind of thought anymore, since Netflix will queue up the next episode before you’ve even had time to process the one you just watched. And streaming shows are designed around that, too, sometimes padding themselves out with detail both to increase episode count (a huge problem in the streamer’s Marvel shows) but also because the audience had no time to do that mental lifting.

Even with its vaunted serialization, DS9 still took the time out to do standalone episodes, and many of those are considered not just the best of the show but the best in the franchise: ‘Duet,’ ‘The Visitor,’ ‘Far Beyond the Stars.’ They pack in all the information you need to get to the heart of each story neatly enough that, more than 20 years later, they’re still as enjoyable as when they first aired.

None of this is to say that I didn’t enjoy the rest of the show; I still shed a tear during that final shot of ‘What You Leave Behind’ as the camera zoomed away from the station. But I feel like I learned a lot about how format and your method of consumption can twist how you feel about a story.

‘Deep Space 9’ is available for streaming with subscriptions to CBS All Access, Netflix, Hulu or Amazon Prime, or by purchasing episodes via video on-demand.

Keeping the number of episodes per season down has its benefits. 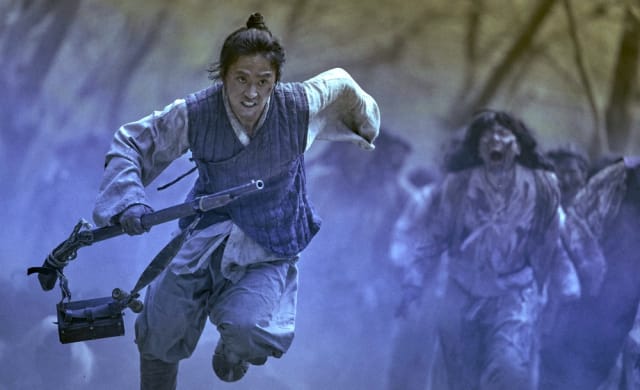 I have developed a pandemic habit. Well, several habits. But one of them is watching a (usually) foreign show every Friday with my friend Wendy from Singapore over Skype. It’s a fun way to get me to watch things I would otherwise be too distracted to pay attention to. When we first started in March, Wendy suggested we kick things off with the Korean series Kingdom. I was still a little resistant to watching foreign-language shows because I wasn’t into subtitle reading. And as much as I love zombie movies and TV series, I felt the genre was getting a little tired.

I just wasn’t prepared for the ridiculous amount of love and appreciation I would develop for Kingdom. Set in Korea’s Joseon period, the show follows the Crown Prince as he fights for his throne while a mysterious disease spreads across the country. It’s odd to think about zombies in historical costumes, but somehow it works. Wendy and I devoured the first season in one sitting, before deciding we had to pace ourselves for season two. There are only six episodes per season, so that was quite the challenge, but the relatively small number of episodes keeps the show tight.

There are no superfluous subplots dragging the storytelling down. There’s no need to insert unnecessary romantic tension that takes the viewer away from more interesting scenes. Kingdom is a show that has a story to tell, and by focusing on the drama, it’s incredibly engaging. It also offers a unique and compelling reason for the zombie disease, as well as potential cures and limitations. A twist at the end of the first season also kept things fresh, presenting our heroes with challenges that don’t feel forced.

Speaking of our heroes, I’ll admit it: Kingdom resurrected a crush I developed in my youth for Ju Ji-hoon. He plays the Crown Prince in Kingdom and had the same role in a 2006 series called Princess Hours. Not only was it a delight to watch Ju’s growth as an actor since that show, but I swooned over every clever decision he made as a strategist protecting his people against relentless zombies, rampant poverty, hapless politicians and devious usurpers. Thoughtful and brilliant world leaders? What a fantasy. (Ju is also a beautiful man, which is a nice bonus.)

Kingdom is a great ride, and it opened my eyes to the world of Korean entertainment. It was also a gateway into other foreign shows on Netflix, where the bar is often higher for non-English content. I’ve also come to appreciate six-episode seasons as it’s highly likely that they’re tighter and focus on plot and drama. Since finishing Kingdom, I’ve watched a slew of Korean shows, and Wendy and I checked out some foreign entries on Netflix like Freud, Bloodride and Into the Night. They’ve been hit or miss, with Freud being a convoluted mess.

I do want to briefly shout out Into The Night, which is Netflix’s first Belgian original series. It’s a masterful work and a supremely enjoyable ride, featuring a gripping story, multifaceted characters and deeply complex moral situations amid a mysterious deadly phenomenon killing the world.

I’m still not very likely to dive into foreign shows on my own, but my attitude to them has changed. Subtitles will no longer keep me from devouring the best work the world has to offer. As we quickly run out of things to watch, I’m glad we have a global variety of entertainment within our reach.

‘Kingdom’ is available for streaming with a subscription on Netflix.

‘Solar Opposites’ is so much more than another ‘Rick and Morty’

Fresh from the mind of Rick and Morty co-creator Justin Roiland, Hulu’s latest animated sitcom series, Solar Opposites, is a turducken-ish tale of refugees struggling to adapt to their new adoptive homes.

The main story revolves around a family unit of sentient space plants from the planet Shlorp who arrive on Earth after an asteroid annihilates their world. After crash-landing in middle America, the Shlorpians — Korvo and Terry, plus their two replicants, Yumyulack and Jesse, as well as their infant genetic supercomputer, Pupa — must integrate themselves into society until they can repair the damage to their spacecraft. This, of course, invariably results in a series of hilarious misadventures: Korvo and Terry unleashing a von Neumann machine upon the town to gain popularity with their neighbors ahead of an HOA board election, Yumyulack and Jesse unwittingly achieving perfect attendance records during summer vacation or Korvo’s misguided attempt to build both a robotic mother for the replicants and a man cave for himself.

But that’s only half of the story. Super-advanced aliens capable of traveling across the galactic quadrant aren’t particularly well-known for respecting the autonomy of Earth’s native inhabitants (looking at you, Predator). Jesse and Yumyulack are no different, the mischievous pair having developed an affinity for shrinking humans that displease them to Tom Thumb-size and unceremoniously dumping them into a wall-mounted terrarium. There, the unlucky humans must fend for themselves in a Mad Max-meets-Escape from New York apocalyptic wasteland with nothing to subsist upon but Jesse’s occasional donations of candy and whatever they were carrying at the time of shrinking. This story-in-a-story format is really clever as it allows the showrunners to seamlessly transition between the goofy, albeit ultraviolet adventures of the Shlorpians (just wait for the white power scene in episode 2) with a far darker drama unfolding within the terrarium walls.

Viewers will be able to tell from the opening scene that Solar Opposites is very much a Justin Roiland joint venture (co-created with Mike McMahan), from the generous dusting of pop culture references to the R&M-esque squiggly pupils of their eyes. Roiland himself voices Korvo, while Thomas Middleditch portrays Terry. Sean Giambrone and Mary Mack voice Yumyulack and Jesse, respectively.

The entire first season is currently available on Hulu for your viewing pleasure. The art style and semi-improvisational humor are very much in line with what viewers have come to expect from Rick and Morty. However, this show is in no way a spin-off of the popular Adult Swim series. For one thing, you won’t see fans of this show jumping on McDonald’s counters caterwauling about dipping sauce availability and that, in my opinion, is reason enough to give Solar Opposites a shot.

‘Solar Opposites’ is available for streaming with a subscription on Hulu.